You are here: Home / Articles

Read the full article at WinterParkMag.com 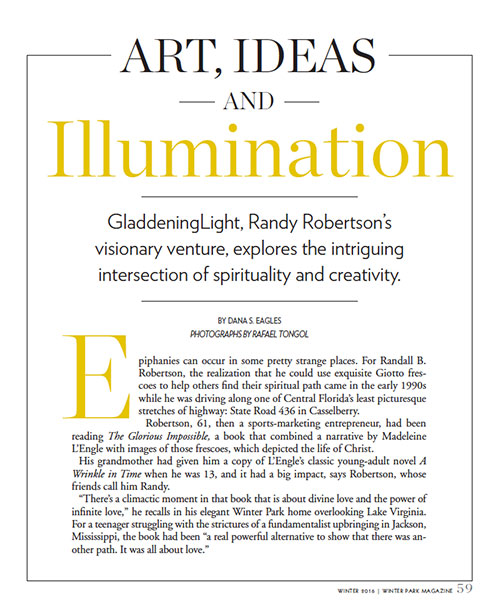 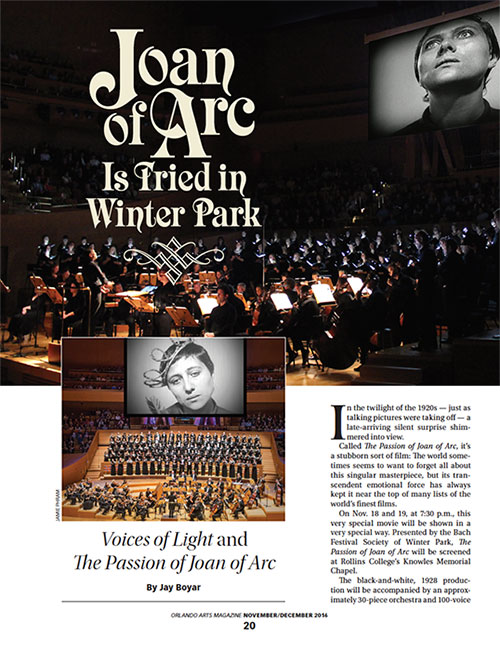 It began for me personally while standing at a pay phone outside a hometown restaurant in Florida.  I had read in The Orlando Sentinel that Madeleine was recently in our area, a thought that sparked the idea to call upon her at the cathedral library position noted in the newspaper article.  I hesitated, “What am I doing standing in the wind of an outside phone calling this literary legend?”  The cathedral receptionist put me right through.

Just the voice you would imagine – one we all know and remember so well – chiming, “Hi!” and patiently listening to me recount the lifelong odyssey leading me to that moment.

“You see, Ms. L’Engle,” I rambled, “A Wrinkle in Time changed my entire worldview as a child, and I studied the Italian renaissance overseas where a discovery of Giotto’s painting yielded similar breakthroughs.  And when I discovered this synthesis of beauty, art and faith in your book The Glorious Impossible, I had to call.  I’ve been reading it recently to my children – not realizing you had written that powerful narrative to accompany the art – when something awoke in me, insisting this be shared with many more people in a new way.  Ms. L’Engle, I’d like to come to New York to speak with you about producing a theatrical presentation of The Glorious Impossible, one that we could share with audiences everywhere.  Would you perhaps agree to see me?”

We know what she said, because she was so remarkably present for others, open to possibility.  (This is a trait shared by humans through the ages who have developed a higher calling, a higher consciousness.  God exists there in the moment, free from the guilt of the past’s missed opportunities and the future’s anxieties.)  “Of course.  When can you come?”

That first trip was postponed, but the vision persisted until a year later we met at one of her writer’s workshops at Holy Cross Monastery up on the Hudson.  My multimedia program was complete, her text edited to accommodate a musical score and an hour long production of Giotto’s painting.  We sat after dinner with the monks and workshop participants in the monastery library when I asked Madeleine to read, allowing me to rest a hand on her arm to signal when to stop and start the narrative.  It was a divine moment at the conclusion as she leapt to her feet to hug me and declare, “We must do this many more times together.”

What followed were trips to British Columbia (the Sorrento Centre), Ontario (for the Windsor diocesan convention), New York (St. Paul’s Catholic), Kanuga in North Carolina, Palm Beach, Florida and other places around North America to tell the story of the life of Jesus in a way that celebrates God’s imparting of artistic genius.  Despite almost two generations of age differential, Madeleine and I became close along the way.

I learned so much from her – how to remain open to infinite possibility, how to be truly present for others.  I remember one time, standing in the pouring rain outside her cabin at Kanuga, when she asked me about a mutual friend.  Madeleine stopped and focused her eyes intently upon my reply, totally unaffected by the rain, in no hurry whatsoever to hear truly how they were doing.  She taught me again in that moment.

There were other times to learn and absorb – over spaghetti at Crosswicks, potluck at her New York apartment – to celebrate the power of music, philosophy and of spirited conversation.  Even that next to last time visiting her at Rose Haven Assisted Living, when I caught her in a good mood, joyously exclaiming, “Randy!” upon entering the room.  Recounting with her a recent trip to Italy, she insisted we plan to go together.  Over wine and cheese outside, that loving twinkle remained evident.

That’s what she did best, teach us about love.  Though the religion of my childhood was more about guilt and shame, Madeleine L’Engle shattered that prism to reveal one of a universe bound together in divine love.  I strive to see that always, and to thank her for so ably showing it to me.