Thank you to the 175 participants who made the 2012 Symposium a gratifying expression of agapē love for community. 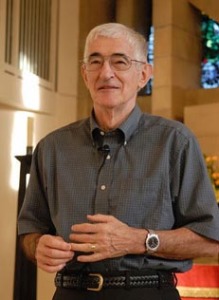 Hear an audio podcast of John Dominic Crossan’s February 4, 2012 lecture, God and the Community of Resurrection, from the GladdeningLight Symposium, courtesy of the Carroll McKenney Foundation for Public Media, producer of media content featuring local voices that matter to Central Florida.

Feed the soul, savor the beauty and experience the communion love of agapē in the gladdening light of God.

Video from the Event

GladdeningLight is for the spiritual seeker yearning for radical justice and a loving community in an unjust world.

GladdeningLight’s 2012 Symposium featured several practicing artists, including Brendan Bannon, who supported Crossan’s vision of God’s longing for a just and loving community, representative of all. Bannon, along with the other artists, exhibited and spoke about his own creative aspirations struggling for transformation beyond societies that marginalize the disenfranchised.

From his home base in Africa since 2005, Brendan Bannon, www.brendanbannon.com, has expressed fervent devotion to the humanitarian plight of his subjects through the art of photojournalism, a talent inspired in him by his father Anthony, and by his mother who processed film at home in a makeshift darkroom. During his twenties, Brendan cared for his mother who became afflicted with multiple sclerosis, an experience he credits with informing his approach to photography.

“I don’t shy away from difficult stories. The experience of taking care of my mother showed me clearly that behind every moment of perceived suffering there is profound victory over circumstances. I look at people’s lives as being full of meaningful relationships, striving against the odds, achieving small victories.”

Brendan’s work in Kenya, South Sudan, Somalia, Sierra Leone, Nigeria, Tanzania, Congo and India has appeared in The New York Times, leading magazines and newspapers in Britain and the Christian Science Monitor. To occasionally catch his breath, he maintains a home stateside in upstate New York.

Photos from the Event

“GladdeningLight has been responsible for giving me access to experiences that have fed and stretched me. You have led me into beautiful places and introduced me to extraordinary people—and made it possible for me to have real conversations with icons of our generation.

The ripples of your efforts are far reaching. None of us will ever know how many lives you will touch because of your genuine concern, your big ideas and your willingness to put them into action.

I know that you have played an enormous role in my personal journey. The affirmations and ineffable spiritual moments connected with GladdeningLight are amazing to me. My relationship to the universe and to God have been informed by doors you have opened to me.

You have such a generous spirit. Never underestimate your influence and calling in the work you are doing. It is tremendously important.”
Elaine Johnson